Merton of the Movies 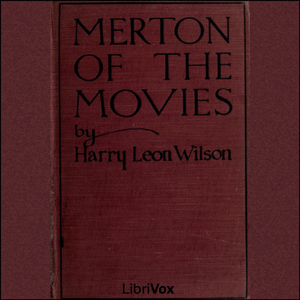 Merton of the Movies

LibriVox recording of Merton of the Movies, by Harry Leon Wilson. Read by Margaret Espaillat.

Merton of the Movies is a comedy that centers around Merton Gill, an aspiring dramatic artist from Simsbury, Illinois who makes his way to Hollywood to become a serious actor. How could Merton fail in attaining his dreams after finishing a correspondence course from the General Film Production Company of Stebbinsville, Arkansas, certifying him to be a competent screen actor?

Harry Leon Wilson, the author, was a very popular humor writer in the first decades of the 20th century. This book was made into film several times, the last in 1947 starring Red Skelton. (Summary written by Margaret Espaillat.)

Reviewer: lanternland - favoritefavoritefavoritefavoritefavorite - July 11, 2013
Subject: This was great!
I found this glimpse into the days of silent movie making extremely interesting. I'm a fan of silent movies, and in some ways I think they were a higher art form (Merton would agree with me, I think)than the talkies - much more international, easy to translate, for instance. The characters were very very charming as was the plot, though I agree with the reviewer above that on occasion extended details of scenarios slowed things down a bit. As for the reader, Margaret Espaillat, I think that she was PERFECT! This is one of my very favorite Librivox books!

Reviewer: Danny from Finsbury Park - favoritefavoritefavoritefavoritefavorite - July 7, 2011
Subject: Well worth a listen
I'd never before heard of the book or its author, and it was a pleasant discovery. The story is well written, with first-rate dialogue, and it gives a fascinating picture of the early days of Hollywood. The narration by Margaret could hardly be better.

Reviewer: Arch Stanton - favoritefavoritefavoritefavorite - June 27, 2010
Subject: Film Fun
A good reading of an amusing book. Merton is a small town hick who dreams of being a movie star and so goes to Hollywood to try his luck, all the while infatuated by an ideal view of film making, in particular a female actress of the 'Perils of Pauline' type. Once there, he does have eventual success, but not in the way he might have hoped for. The central weakness of the book is Merton's sustained naivety, which sometimes stretches belief too far, this while the detailed recounting of scenarios, if amusing, can slow matters down. Only one chapter (19) falls a little flat IMHO, labouring what should have been conveyed implicitly. However the overall warmth of Merton's character is a winner and those who enjoy cinema of the late 20's early 30's ought to hear this. (Harold Lloyd's 'Movie Crazy' was loosely inspired by this book, and is worth seeing.)

Uploaded by librivoxbooks on November 23, 2009